I read The Secret of Nightingale Wood a few months ago after it was recommended to me by the most excellent staffers at the Curious Iguana bookstore in downtown Frederick, MD. I expected a fun and easy read given the genre, but it was compelling and evocative and deeply moving; it caught me off guard and I couldn’t shake it for weeks.

Our protagonist for Nightingale Wood is a 12 year-old child named Henrietta — called Henry — who’s moved to Hope House in the year 1919 with her parents, her baby sister, and her Nanny Jane for a fresh start after a terrible tragedy. Hope House is near the English seashore but is quite removed from the rest of the town, with sprawling acreage and gardens and woods to explore. It’s clear from the start that Henry’s mother is unwell, and just as we start to delve into the backstory of these characters and how they arrived at Hope House, Henry’s father abruptly leaves England for work abroad and things feel more bleak than ever for the family. While Henry’s mother spends her days locked in the bedroom upon the orders of the cruel Dr. Hardy, Henry finds solace in the woods beyond the grounds of the mysterious Hope House, where she discovers a stranger who will eventually reveal its secrets.

Henry is bright and feisty and the manipulative, wicked Dr. Hardy is her foil. Henry’s mother is suffering from what’s obviously severe depression and, true to the era, has been prescribed loads of tranquilizing medications and “rest cure” by the doctor, who visits Hope House frequently to make sure she — and the rest of the household — are following his orders.

Nightingale Wood has its mysteries, sure. And the setting and mood certainly nod towards the classic, The Secret Garden, which will entice many readers who love a fairy tale theme. But what drew me into this story was Mama. For me, Nightingale Wood was the story of what happened on the other side of the door in The Yellow Wallpaper.

In college, I read the famous short story The Yellow Wallpaper by Charlotte Perkins Gilman for a Feminist Lit class. Even as a child-free twenty year-old, I was haunted by the tale of the woman who was locked away from her family in the room with the yellow wallpaper on the male doctor’s orders of “rest cure” to treat her mental illness (which is widely accepted in many interpretations to have been postpartum depression, or even postpartum psychosis). In the late 1800s-early 1900s, “rest cure” was the practice of forcing inactivity upon a patient in an effort to cure “hysteria,” or other such perceived mental illness. It was overwhelmingly prescribed for women, though, and as doctors at the time were men, it was often abused as a misogynistic means of controlling women who were either otherwise healthy or in need of real medical treatment, not confinement.

This is what happens to Mama in The Secret of Nightingale Wood. She’s imprisoned and told that her valid feelings of depression are nothing but a manifestation of her hysteria. I empathized deeply with the heartsick mother, especially as a postpartum depression survivor myself. And so, we see Dr. Hardy dole out tranquilizers, make demands of her family to make certain she’s locked in her room at all times, speak hatefully and threateningly to Henry, and even strong-arm his way into a patriarchal role in the family. Long after I put this book down, I couldn’t shake Mama and her grief. Which reminds me of a favorite quote from this book (I have a lot): “Perhaps that’s what grief is, Henrietta… Grief is just amputated love.” 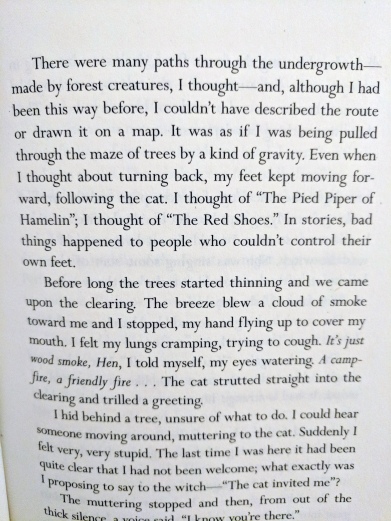 Author Lucy Strange has a positively melodic writing style. Despite its publication date of 2017, I truly felt as though I was reading a classic, and I credit Strange’s prose for that.

Technically, Nightingale Wood is rated for Middle Grade readers, aged 9 and up. The writing isn’t difficult to comprehend and, at just under 300 pages, it’s not a large book, either. A third or fourth grader could read it. But it’s possible that an elementary-aged child will miss some of the themes and details that an older reader wouldn’t. And there are some thematic elements which are questionable for that age, like death, doctor abuse, mental illness, and general feelings of despair. As a mother of three children, I’d qualify it as a perfectly appropriate adult fiction read, so don’t be embarrassed to browse the juvenile reader’s section for this title. If your child reads it, I would encourage you to read it, too, not only because it’s truly a beautiful story ***SEMI-SPOILER ALERT*** — it actually does have a lovely, happy ending — but because there’s so much material there to discuss with your son or daughter and gives you the ability to answer any difficult questions they may have.

As soon as I’m finished with my Book Riot Read Harder 2018 Challenge, I can’t wait to read The Secret of Nightingale Wood again. I haven’t fallen this head over heels in love with a book in a long time. I promise you will, too.

“What an astonishing thing a book is. It is a flat object made from a tree with flexible parts on which are imprinted lots of funny dark squiggles.” Carl Sagan